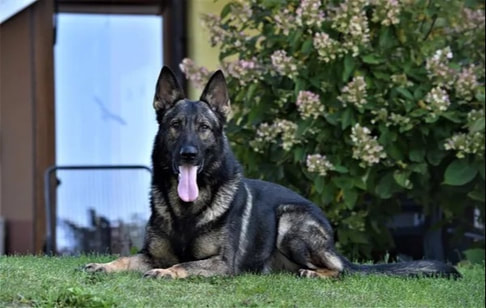 Vargo is a medium-sized, dark sable, dog with a very pleasant exterior who was born in my FCI kennel. He is a dog with a great appetite for work, he loves his people, he is an excellent protector. Vargo is trained according to the IGP - he has passed the IGP1 and BH exams, but he is also trained for civil work. He is an excellent watchdog and he is trained for the safety of his owners. He is equally suitable for police work.
In sports cynology, he stands out for his eagerness for work, vigorous defense, hard and firm bites. In obedience, he excels with unrelenting energy, fast retrieves and an overall perfect drive. More about Vargo in videos from obedience, defense, civil work on a suit.
His great health is one of his top qualities. Official x-ray results HD/ED 0/0, DM N/N (negative), has all teeth and both testicles.
Click for Pedigree
Cora - **SOLD** 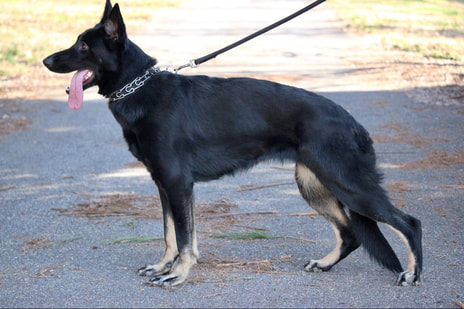 Cora is a import bi-color female from our C-2 litter. She is a medium size female that has great prey/hunt drive and focus while engaging. She has her basic obedience completed. She is good with kids and other dogs. She will need to go in a working environment or an active family.

Up to date will all shots and rabies. X-rays of hips, elbows and spine available upon request. 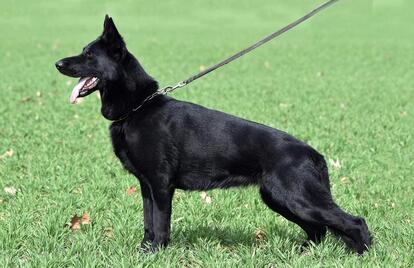 Izabela is a solid black Czech Republic import, titled ZVV1. She is a dog with a great balanced temperament, good with kids, other dogs and animals. She has a medium prey drive and is a easy dog to handle with her constant desire to work/interact with the handler.
Her pedigree consists of half West German working lines and the other half Czech lines. She is going to be a dog used in adding balance to her progeny. 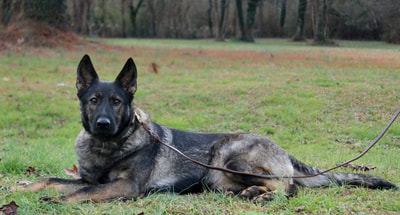 Arwen is a dark sable female, Czech Republic import, titled ZVV1. She is a medium size female with a high prey drive and food drive. She has a great amount of handler focus making her really easy to train. From her mothers side she inherited her high drive. Her father side added the intensity and focus. Arwen will be used to add drive, focus and intensity to her progeny. 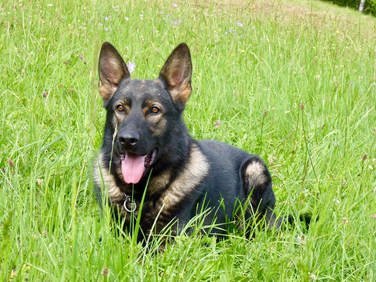 Wiking is a large black sable male imported from Czech Republic.
He is title IPO1 with his hips and elbows certified 1/1 0/0.

He is a very level headed dog with a high prey drive and medium food drive. Would be great dog to a person who is starting IPO training and wants a dog to learn with. He can also be used as a  breeding male. 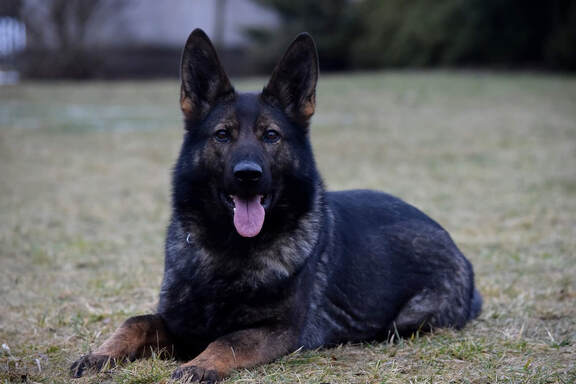 Felicity is a dark sable female DOB 10-21-2017, titled BH, ZM, VT, ZVV1. She's a big, strong female that has a tremendous amount of energy and drive.
From her father's side she inherited the German and Eqiduis lines known for their high drive and harness. Her mother's side added the Czech and German pedigree dogs like Jaro and Orry known for their intensity on the field. Her non-stop desire for work and focus make her the best candidate to produce high drive police and competition temperament dogs. 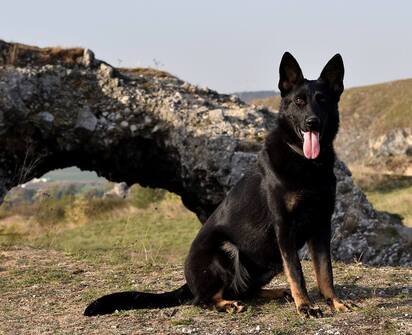 Jori is a bi-color female imported from Czech Republic. She is titled IGP1 and has excellent hips and elbows. She is a high prey drive female with a matching food drive. She is a sport type of dog but with a serious protection. She come from west German lines from her father's side. From her mother pedigree she adds the Eqidius Slovakian lines known to produce very hard dogs.
She will be used to produced high drive balanced dogs, sport type dogs, improving the willingness to please the handler and the desire to work. 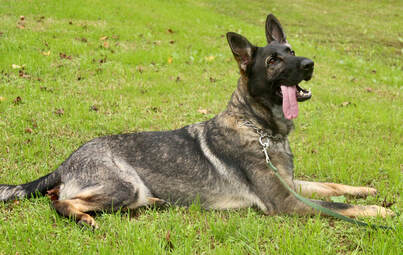 Roxy is a 20 month old dark sable female which comes from our import litter G-1. From both sides she comes from the old Czech border patrol lines. She is an outgoing, higher drive temperament dog which was raised in a family with kids and other animals. She is not good with other females dogs. ​ 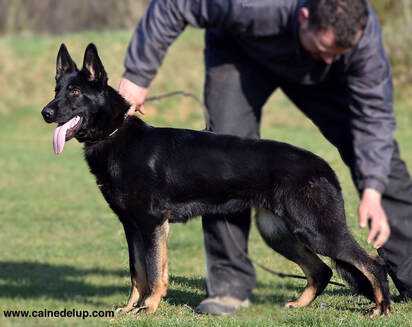 Alba is Czech Republic import, she is titled ZVV 1 with hips and elbows excellent. She is a bi-color female medium in size.
​From her father side ,Extreme Orex Aykmar, she inherited her high prey/hunt drive and speed.
Her mother side adds the Eqidius and Czeck lines to her pedigree.

Alba will be used to improve prey/hunt drive, the focus and intensity used for IPO/competition or police dogs.

Alba is line bred to the following dogs: 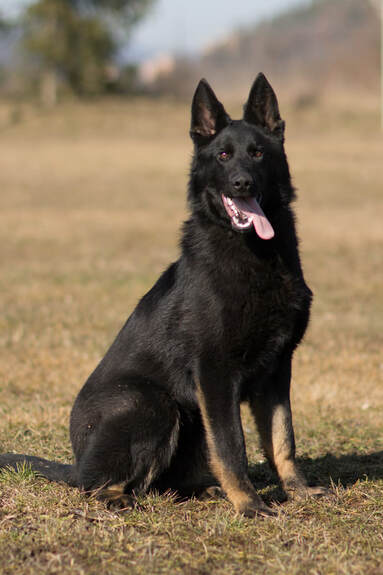 ​Greater  top level of sport, breeding, as well as a family protection dog. 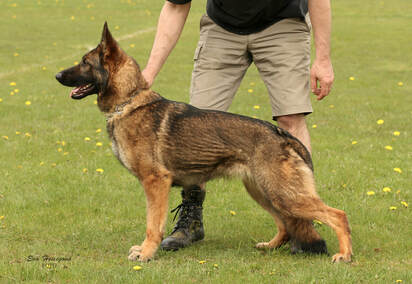 Oxana is a sable female imported from Czech Republic, titled IPO1. Oxana is a female with very high hunt/prey drive inherent from her father side, Kato Aritar Bastet, which was the world champion. From her mother side she inherited the old Czech border patrol and police blood which gave her the strong natural defense she has.
She will be used in our breeding program to produce strong dogs with high drive and the willingness to work. 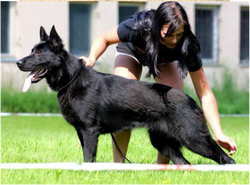 Vassco is a titled Czech import, has his hips and elbows certified excellent. He has a medium to high prey drive and loves to bite. He is good with other animals, dogs and is a very easy dog to handle.
He has sired several litters.

Vassco is line bred to some of the three best dogs that came from the Pohranicni straze border patrol kennel: 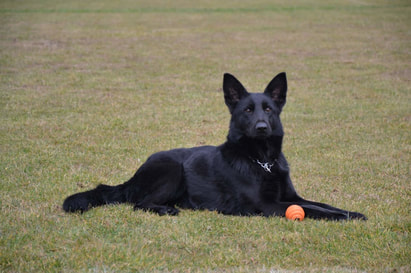 Nora is a solid black Czech Import female. She is a medium sized female that comes from very good old Czech bloodlines. She has a very high defense and loves to bite and also has a medium drive. She will be great as a family companion or as a breeding female to incorporate old blood Czech lines to a breeding program.